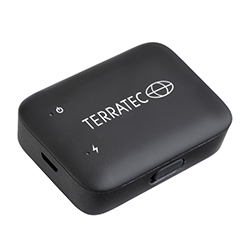 Wireless and compatible with Android and iOS
Laborious cabling are omitted, the mobile TV experience is completely wireless. The TERRATEC receiver is equipped with a built-in accumulator so that it is working for hours on the way without additional power supply. The App is working on all terminals from Android 4.0.3 on and on all iOS operating systems from version 5 on. Switch the receiver on and off by a push on the button, an LED will inform you about the energy status.

Lots of useful features and a large scope of delivery
The CINERGY MOBILE WIFI TV has a recording function. The station scanning is working fully automatic, the receiver with multichannel sound supports the WLAN standard 802.11b/g. A DVB-T telescopic antenna, a DVB-T magnetic foot antenna and a MCX antenna adapter are included in the scope of delivery.